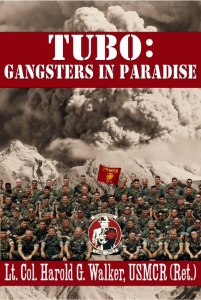 “TUBO, Gangsters in Paradise,” I have begun writing the true story of Marine Reserve Helicopter Squadron HML-776 composed of 6 UH-1N “Huey” helicopters that were mobilized for action in the Gulf War (Desert Storm).  However, instead of going into Iraq, the squadron was ordered to Cubi Point Naval Air Station (NAS) on Subic Bay in the Republic of the Philippines (RP), arriving in March, 1991, after the war in the desert was declared over and victory parades were ongoing throughout the United States.

On June 12, 1991, what had become a vacation-like existence for the 776 Gangsters abruptly changed when Mt. Pinatubo (TUBO), a volcanic mountain whose last known eruption was 500 years before, decided to wake up.  A mobilization intended to take us into battle against an armed enemy then became a life and death battle against one of the most powerful forces of nature. The many missions flown by the squadron in that treacherous and unforgiving environment were generally ignored save for footnoted descriptions in an after-action document or in a general listing of all the military units that evacuated Cubi NAS.  The resulting evacuation of military and dependents became the largest peacetime evacuation in history.  776 didn’t evacuate.

On August 23, 2014, 23 years later, The Philippine Gov’t recognized the Homeric efforts of our small reserve unit by awarding the Military Civic Action Medal to HML-776 in a ceremony held at the Philippine Consulate in Chicago, IL.  776 is the only unit to have received this recognition by the Philippine Gov’t.

Now.  The true story of the unit can be told.